All dimensions Wiki
Register
Don't have an account?
Sign In
Advertisement
in: Cosmic entity, God, Class 17,
and 2 more

Betasm, also known as Iteration 2 Alphasm, is the first Vsauian entity. Betasms view the entire Fourth Everything Layer as their imagination, although the seventh one views sky as its imagination instead. Betasms have a strength equal to exactly one Vsaue, and they often team up in groups of five to take down "Supa Stronk" entities like Bean Man and Dunkey Kong in his obamium form, although sometimes they fail leading to concussions or death

It is possible to travel to another Betasm to another through gateways in its imagination. To the Betasm, this is equivalent to bringing you or any other object that passed through the gate up in a conversation with another Betasm, allowing them to think about it. This method was used by a group of researchers to infiltrate the imagination of the seventh Betasm, allowing entrance into sky, which is why it is so heavily documented despite having a completely different concept of Realms.

Unlike with Alphasm, if a Betasm dies or goes into a comatose state, its imagination will not be destroyed but will leak out of its head as a large puddle of Imagination Juice (See Figure A). This liquid cannot be extracted from the Betasm without killing it unless you have over

power, which is a lot. a Betasm's imagination juice can be moved around inside the Betasm as it pleases though, so it can influence the outside world just by imagining it is, now that's pretty cool. If you happen to kill a Betasm and you keep its dead body close to its Imaginiation Juice, some of its will that may have been infused into the Juice at the time of its death may cause it to revive its dead body, this process can even happen to Betasms that died a long time ago, as there is no limit.

Too high to comprend 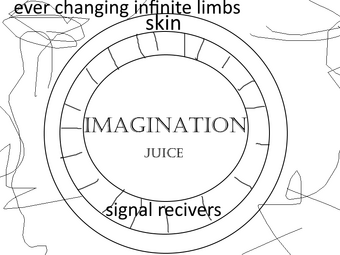 Figure A (Rough anatomy of a Betasm)