The Bignoseverse (sometimes known as the Rednoseverse) is a verse that has the appearance of a clown nose. It contains a wide variety of big-nosed creatures. These creatures have learned to harness the power of big noses. Through rigorous training, one is able to lengthen and strengthen one's nose, making them more powerful and respected among their fellow Bignosers.

Kilroy the Eternal ensures that the Infinose is kept in good condition. The Infinose is an extremely large nose that is the source of all life and noses within the Bignoseverse. If it were to die, everyone's noses would vaporize, throwing the Bignoseverse into complete and utter chaos and warfare.

The 2nd God maintains peace in the Bignoseverse. Those who commit high crimes such as rhinectomy (the removal of one's nose) will be sentenced to a lifetime of serving the Bignose Gods. Not only this, but their noses will be drastically shrunk, weakened, or even removed. Smaller crimes will only earn the shrinking or weakining of one's nose and a much shorter sentence. The greatest creatures in the Bignoseverse, such as those who save someone else's nose, will have their noses lengthened. If they lost their nose in the event, they will have it restored AND lengthened or strengthened.

The 3rd God is tasked with protecting the Bignoseverse from outside threats. They all able to wipe out entire fleets of enemies with a single attack. They fight alongside Bignose Fighters, who defend the secret of the power of big noses and the Infinose. 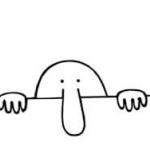