Immortality, omnipresence, omnipotence, omniscience, omnibenevolence, telepathy, telekinesis, mind control, anti-gravity, invisibility, shape-shifting, resurrection, the ability to wipe his enemies out of existence, the ability to change the course of history without going through the hassle of time travel, interdimensional travel, the ability to summon eggs in other universes without entering said universes

Annihilate the furries and the milkduds (his natural enemies), manifest himself in as many universes as possible as the 'Eggtastic Redeemer' in order to preach the Word of the Egglord

Eggzilla, otherwise known as The Egglord or Gigayolk, is the Creator of the Eggverse and Argoth. He is omnipresent, omnipotent, omniscient and omnibenevolent. Eggzilla is a powerful extradimensional entity with early evidence of an earthly presence, dating back to 7000 BCE in ancient Eggville.

Eggzilla was materialized by Avius, the Great Chicken. However, his essence has always existed. He is the creator of eggs in the Eggverse. The eggs that are in other universes do not have origins native to the universes they are spotted in. This is known as an egg phenomenon, some of the most ancient civilizations of mankind worshiped Eggzilla because they couldn't explain the mysterious appearances of these eggs. All eggs naturally stem from the Eggverse. In other words, all eggs are aliens. In modern times, eggs are viewed as a normal, every-day aspect of our world. In Argoth, he is accompanied by a great host of harbingers.

The position of "Egglord" was created when the first Galactic Eggpire was established. The Egglord is the cosmic emperor of the eggpire and the leader of all eggs. An egglord can be voted out of this position by the High Council of Argoth, which is a council of Eggzilla's most trusted harbingers. Eggzilla is the original and current egglord. While he won't always remain in this particular position, he will always be a god and will therefore always have complete control over the Eggverse.

Signs of his Physical Presence 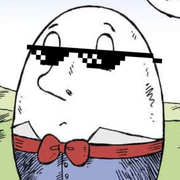