This is juxtaposed to Mercury, as it has a very weak atmosphere, being too hot and light to carry one properly. Thus, it only has an exosphere, containing hydrogen, helium, oxygen, sodium, calcium, potassium and water vapor.[2]The spacecraft MESSENGER discovered magnesium in Mercury's very thin exosphere.

Mercury's origins are so far only theoretical, but research has led to the following conclusions.

Chemicals ( for example: Sulphur and iron ) were found on Mercury that indicate it's origins come from not within a close proximity of the Sun, as the small planet is now, but actually as far out as Mars, or even farther, in the asteroid belt.[3]When a strong planetoid collision occured, it caused the planet to move closer to the Sun and lose its crust and mantle. Mercury had however, a strong enough gravity to not be destroyed completely.[4]This theory also explains why Mercury is such a small planet.

Mercury started to form nearly 4,54 billion years ago. It's possible that Mercury formed like the other three rocky planets. When Jupiter entered the Solar System, it broke up many rocks and metal that started forming into the inner rocky planets. However, when Jupiter was moved away from the Sun by the formation of Saturn, the inner rocky planets could form. And as mentioned above, Mercury likely formed because of the planetoid collision that possibly happened in the orbit of Mars.

As mentioned above, the origins of the planet Mercury are actually only hypothetical. We probably won't know the real origins of the planet, but according to the studies that are there, the theories above seem correct. Scientists are sure that that's how all the rcoky planets are formed and thus Mercury has to be formed in pretty much the same way. Also, chemicals are found to the orbit of Mars that exist on the other rocky planets, so maybe that was the formation of Mercury.

Mercury is one of the four rock-based planets, and whilst being the smallest, even smaller than Ganymede or Titan, it is heavier than both due to its highly (70%) metallic and sillicae (30%) make-up. In fact, its density is the second highest in our Solar System. The density of Mercury is 5.43 g/cm³. Mercury is more massive than Ganymede and Titan combined and while the smallest planet, with no moons or rings, it's density is almost as high as that of Earth.

The very small is made primarily out of iron, on top of that, the core makes up 55,5% of Mercury, compared to the 17% that occupies the Earth.[5]The mantle of Mercury is also very thick and rocky. The magnetic field of Mercury is not very strong, but strong for such a small planet, which however does have a very high density. Therefore, the very small planet must have a very large core for it's size. Especially knowing that it's heavier Ganymede and Titan.

Mercury is usually refered to as ''the iron planet'' or ''a ball of iron''. That's because it contains the largest amounts of iron than any other planet in the Solar Sytem. As mentioned above, the planet is the second hottest, with temperatures of 434 °C. The amounts of iron that the small planet contains are melting under the heat and turn into dust. Then they are drifted away by Solar Winds. If Mercury had a piece of iron on it's surface, the piece of iron would completely melt and fade. Merucry being too small has a very weak magnetic field, which is blown away by stellar winds emitted by the Sun. Mercury's magnetic lines a very weak indeed and the planet can not have an atmosphere, thus it only has a very thin exosphere. The weak magnetic lines of Mercury are just fading away, because of the Sun's Solar Winds.

The surface of Mercury is the least understood of all planets in the Solar System. All sources, understanding and knowledge come from a single flyby of the 1975 Mariner 10. This, however, is not constant, as new data is being analyzed from the 2008 MESSENGER

Mercury has a surface consisting of mountains, ridges, valleys and plains, similar to Earth, except more chaotic, as Earth doesn't regularly feature meteor impacts. That's because Mercury has a very thin atmosphere, so meteors do not burn up, hitting Mercury, whcih has a lot of craters because of the meteors that hit the planet. The same thing happens with the Moon, which is hit by meteors and has a surface that ressembles that of Mercury.

Mercury also has these basic features: it contains 9 overlapping volcanic vents on the southwest rim of the Caloris Planitia, with each being up to 8 - 9 km in diameter and being a few billions of years old.[7]Volcanism on Mercury is not a phenomenom that usually happens, but it certainly can occur. 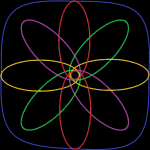