The moquark is the building block of all the Möbiverses. It is similar to a string, and it is made of protoverses. It is shaped like a square, and the smallest Möbiverses are made from it by a moquark turning into a manifold.

The reason it turns into a manifold is because of the second entropy law, which tries to make objects have the least number of sides possible. 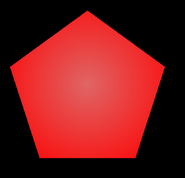 An image of a pentagonal moquark.

There have been no known findings of triangular, hexagonal, heptagonal, octagonal, or any other shapes of moquarks, and so it is thought that they don't exist.

The very middle of a moquark is brighter than it's edge. Why is that? Well, it was recently discovered to be partially composed of Kappa Particles, and this could explain why the insides of moquarks wouldn't try to become manifolds themselves. The Kappa Particles actually hold the moquark together and keep it from turning into fine protoverse dust.