On negative first dimension, there is no point on this space.

In the negative second dimension, there exists the -2D shape of the Dinull polytope. It has little physical meaning, even in the realm of abstract polytopes, but does show up in some places, such as in Cinioveres. 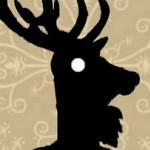