Our Metaverse is the Metaverse in which the Multiverse we live in is located.

This Metaverse contains Multiverses and Universes of similar sets of laws to our Multiverse. This includes such examples as: Periodicverses, Bodhea Universe, Multiverse of Geislunrefur, H̄æwnverse, ..

Multiverses, since they are made from the same Proto-Xenoverse "material" (material is in quotation marks because it technically isn't a material, but the word is sufficient), not just that but from the same general regions, reflect on the laws of the Metaverse itself. Unlike the Multiverses though, the Metaverses aren't homogenous in their laws. Different regions are governed differently, which makes talking about it more difficult.

Because of this, Metaverses are disected into many parts, ours is disected into 54 regions, each with notable differences in laws. These regions aren't constant, continuously slowly changing. If one goes from region MRn to MRm, where MRn and MRm contact each other, one will find many similar patterns and behaviors, but a couple things gradually change, as one gets near and further away from the edges of the regions.

Most Multiverses, by now, just like many of our Universes, have original names, but are designated using the M- prefix, which works just like the U- designation. 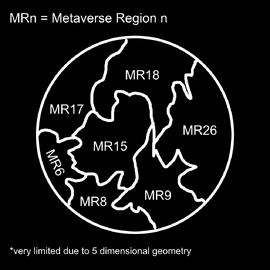 MR1 is the region of our Metaverse inside of which our Multiverse is located in. It contains 1,103 Multiverses, and is the 17th smallest by volume.

Multiverses in this region don't exactly have any forces strong enough to affect other Multiverses themselves, but are rather carried by the Universes inside of themselves, which have fields extending out vastly beyond them in complex geometries, causing Multiverses to act like particles of the same charge. That is to say, they repel each other, but only upon getting too close to one another. It has been noticed, that these effect can shift around the Universes in both Multiverses which undergo this.

Multiverse collisions, if they happen, will frequently result in multiple Universes being exchanged and affecting both Multiverses in much bigger ways. This phenomenon is believe to be the biggest cause of certain Universes being totally different from neighbouring ones in the same Multiverse.

When a Proto-Xenoverse forms, special encrypted sets of laws are "written" upon its surface. Usually, the folds upon its twisted surface are small enough to where a section containing one set of laws can bend upon itself to either the same section, or slightly further along, where the laws are a bit different.

Sometimes, however, the fold is either too long for this to be possible, or the foldings themselves cause this to become impossible, or for a couple other reasons, the crossing will include a section from one set of laws and another much further along with a completely different series of laws. This causes them to mix but rarely become compatible, causing side effects such as: inconsistent laws, extremely high/low Eisler values, incompatible laws, laws which cause paradoxes, laws which cancel eachother out infinitely, laws of variable Eisler values, and so on.