All dimensions Wiki
Register
Don't have an account?
Sign In
Advertisement
in: Scenarios, Explore the universe, Cosmic entity

The first boom is an event that is likely the source of all creation. It is considered the first Big Bang to have ever happened. This first boom created all multiverses, barrels, boxes, and anything of the like. All creatures were made after the first boom, except a few special ones (more details on that later). The First Boom happened so long ago that it's unknown how to even specify how long ago it was.

Creatures before The First Boom

These entities also aren't always extremely powerful, as in some cases they can control properties so specific or useless that their power is basically nullified.

The Primordial Speckoid (or Prispeck for short) was one of the first entities to exist. It existed even before the first boom. However, once the first boom happened, these creatures ended up dying. The only picture we have of one was a picture taken by another creature known as The Prime (they have their own page as they are very important to many other things than the first boom). Primordial Speckoids, as studied by The Prime, was shown to be very weak to any form of energy. For this reason, they had to stay very far away from them, as The Prime emits a lot of energy. They took pictures of them and watched them via a Primordial Telescope, created from Primium.

Primium was the first ever element. As such, not much is known about it, especially considering the fact that it doesn't exist anymore. Neither does basically anything before The First Boom.

If two or more prispecks were to collide, they'd create a miniature explosion, as Prispecks have energy. It is likely that prispeck's internal temperature were 81.53 degrees below absolute zero (somehow). As such, they would move backwards through time. Anything they touched would also start moving backwards through time. Since they didn't heat up, it's likely that the space around them was very cold. According to The Prime, the temperature of the space around them was around -82 degrees kelvin. As such, time was reversing. This would technically mean the first boom happened before these creatures existed, as time moved backwards when these existed. Once the first boom happened, temperatures went up to a very high temperature, resulting in time starting to move forwards.

A seemingly invisible force known as Absolute was seemingly responsible for all the Prime Forces (Forces were much different before the first boom compared to now with gravity, electromagnetism, weak force, etc.)

There is no picture of this "Absolute" as they, again, were invisible. However there are some pictures of some trails they left behind, signifying the fact that they indeed did exist. Absolute seemed to be the first creature to appear in the existence of ever. The Prime tells about how they and the Absolute worked together to create The First Boom. 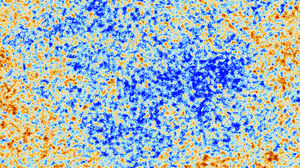 This is the trail left behind by Absolute.

Sadly, not much more is known about the Absolute.

Community content is available under CC-BY-SA unless otherwise noted.